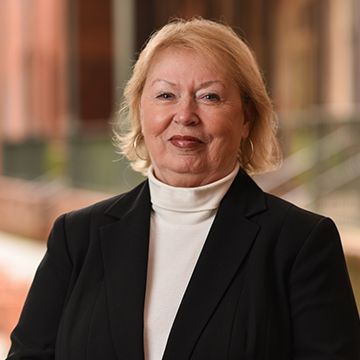 Professor Shirley Darby Howell attended Huntingdon College in Montgomery, Alabama, where she majored in Foreign Languages, concentrating her studies in Spanish and French. Her senior thesis, El Siglo de Oro, was written in Spanish and was permanently placed in the Houghton Library.  Professor Howell graduated First in Class at Huntingdon and was awarded the distinguished Margaret Reid Medal of the College.

Professor Howell attended law school at night at Jones Law Institute, which was located on the campus of Huntingdon College and was overseen by the University of Alabama School of Law.  While in law school, she developed interests in both poverty law and family law, interests that have defined and informed her career both as an attorney and a professor.  She graduated Second in Class.

In 1981, Professor Howell accepted a position with the Legal Services Corporation of Alabama, a Federal program designed to provide indigent citizens with access to the legal system.  This position afforded Professor Howell the opportunity to join a team of attorneys, from throughout the United States, who had been assembled to provide advocacy for Alabama’s poorest citizens.  Professor Howell concentrated her attention upon issues involving public housing for the poor.  She continues to regard her experiences representing the poor as being among the most compelling experiences of her life as an attorney.

Professor Howell’s private practice of law has been devoted to civil rights advocacy and to issues concerning family law.  During her nineteen years of practice, she authored “Sexual Harassment in the Workplace,” Alabama Lawyer, Vol. 52, No. 4, July 1991; and “Psychotherapy and the Law,” Alabama Lawyer, Vol. 56, No. 1, January 1995.  She has been awarded Martindale-Hubbell’s highest professional rating for preeminence in her field of practice and for the highest levels of integrity.

Professor Howell’s interests include yoga, theatre, politics, and flying.  She is presently studying for her private pilot’s license.