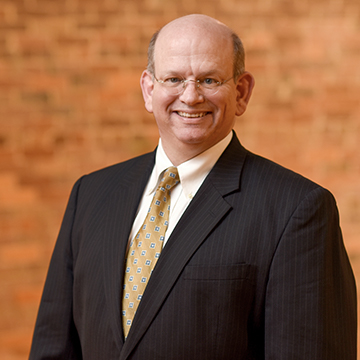 Professor Campbell joined the faculty in 2007.  He graduated from Auburn University in 1988 with a degree in International Business and from the University of Virginia School of Law in 1993.  Following a judicial clerkship for the Hon. Emmett R. Cox on the United States Court of Appeals for the Eleventh Circuit, Professor Campbell entered private practice in Montgomery and Birmingham.

In 2000, Professor Campbell became an Assistant Attorney General in the Alabama Attorney General’s office, where his practice focused on constitutional law and civil rights, with an emphasis on the First, Eleventh, and Fourteenth Amendments, state immunity, election law, and the Voting Rights Act of 1965.  In Spring 2002, he was a National Association of Attorneys General Supreme Court Fellow.  In 2006, Professor Campbell became Deputy Chief Counsel to United States Senator Jeff Sessions, Chairman, and then Ranking Member, of the U.S. Senate Judiciary Subcommittee on Administrative Oversight and the Courts.  His responsibilities included legislative analysis, drafting, and negotiations, management of hearings, and review of judicial nominations.

Professor Campbell teaches federal and Alabama civil procedure.  In addition, he serves as President of the Board of Directors of Health Talents International, Inc., a nonprofit medical missions agency operating in Guatemala and Nicaragua.

No Sirve: The Invalidity of Service of Process Abroad by Mail or Private Process Server on Parties in Mexico Under the Hague Service Convention, 19 Minn. J. Int’l L. 107 (2010).